Blue Moon Comics Returns to Publishing in 2020 with Diversions! 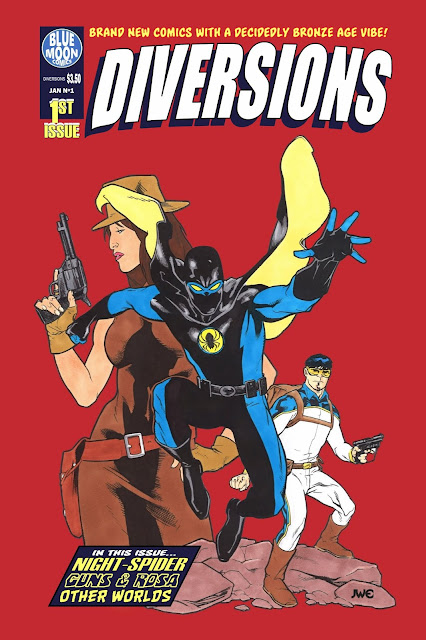 Lloyd Smith's Blue Moon Comics Group returns to publishing after nearly two decades with the first issue of Diversions in 2020! Diversions will be a 28 page black and white anthology featuring short stories in a variety of genres, all created, co-created, scripted, and/or written by Smith with art by a dazzling array of amazing artists. The stories will be written in a style that pays tribute to the Bronze Age (or as Smith has coined it on his Diversions of the Groovy Kind blog, "The Groovy Age"), even to the point that they could have "passed" the Comics Code Authority of the time.

The first issue of Diversions will deliver three new features Night Spider: a "creature of the night" type mystery man with plot and art by JW Erwin; Guns & Rosa: a western strip about a vengeful young woman who wanted to be a nun but wound up a gunslinger with art by Joe Koziarski; and  "King of the Hill" a science fiction fable (part of the anthology-within-the-anthology Other Worlds) about a lone man on a planet filled with killer ants with pencils by Donnie Page, inks by Ken McFarlane, and tones & lettering by Mort Todd.

"I hope Diversions will thrill fans of my old Blue Moon Comics imprint, fans of my Diversions of the Groovy Kind blog, and hopefully a whole new generation of comicbook fans," declared Smith.